Hello, my friends.  This is banned book week, 21 – 27 September 2014, where we celebrate having access to books that someone else decided at one time were too controversial, too provocative, too real, too eye-opening, too mind-expanding for our delicate sensibilities.  As if anyone knows better than you what will help you understand the world, become a better person, expand your perspective, and live a better life.

I hope you’ll find and read some of the books that have previously been banned or worse, burned by the unquestioning and easily controlled.  The mass is easily manipulated.  Just ask any Border collie. Reading banned books is a simple act of defiance but a powerful one.  You can Google the banned books list.  You will be surprised by what classics made the list, deemed too offensive for human eyes.  It is impossible to read this list and not think, “What were they thinking?”  Well, they weren’t thinking but they still thought they knew what was best for you.  Beware of people who claim to know what’s best for you, particularly if you are over the age of twelve.

I leave you with a quote from my favorite banned book, To Kill A Mockingbird.  I can not imagine growing up in the South and not being able to read this classic tale.  You know what?  It does not matter that Harper Lee never wrote another book, because this one is just that good.

To Kill A Mockingbird taught me that not all gruff people are truly mean, sadly that justice does not always prevail, that people’s fears are a far greater motivator than their sense of fairness, and that courage is found in quiet deeds at home as well as on dramatic battlefields. 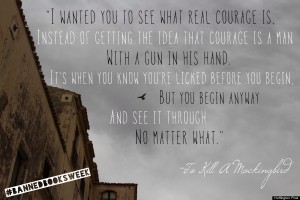 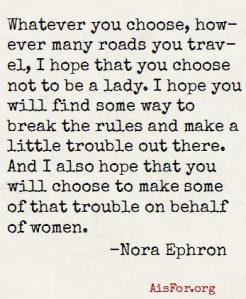 This blog is called “Less Than Ladylike” for two reasons.  One, this quote from Nora Ephron, bless her heart.  Two, because both my grandmothers cautioned me more times than I could count against acting less than ladylike.  Sorry, Grandma Grace and Grandma Sallie Willie.  Got to follow my heart.  I promise I will not follow it into coarseness, even though I occasionally drop the F-bomb for effect, but will follow it into loud, raucous debate whenever and wherever it is necessary.

I believe that all children, no matter their family’s socioeconomic strata, deserve education, health care, and a safe place to sleep.

I think it is patriotic to take care of all military personnel before, during, and most importantly, after their service.

I believe that every citizen’s vote is equal and that free flowing money only corrupts the elective process. Supreme Court, what the hell were you thinking with that Citizen’s United crap?

I believe I will have to act, talk, and write less than ladylike for a long, long time to come.  I am at peace with that.

What I can’t believe is that I still have to protest all these things in 2014, a full forty years after I started questioning how this country — rich and powerful as it is — works.  If I weren’t so mad, I’d be sorely disappointed.