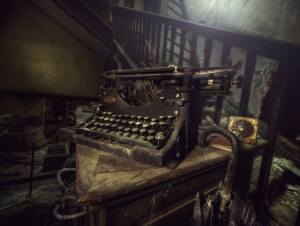 This clever Dear John letter perfectly illustrates why punctuation matters.  Exact same words, only the punctuation has changed from one version to the next.

I want a man who knows what love is all about. You are generous, kind, thoughtful. People who are not like you admit to being useless and inferior.

You have ruined me for other men. I yearn for you. I have no feelings whatsoever when we’re apart. I can be forever happy – will you let me be yours?

I want a man who knows what love is. All about you are generous, kind, thoughtful people, who are not like you. Admit to being useless and inferior.

You have ruined me. For other men, I yearn. For you, I have no feelings whatsoever. When we’re apart, I can be forever happy. Will you let me be? 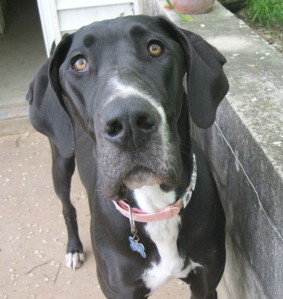 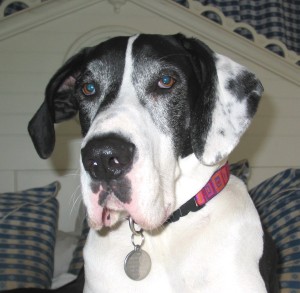 Pictured in the top photo is Mosey, our current Great Dane.  The bottom photo is of Oney, our first Great Dane who passed away in 2010.  Their personalities are so similar that Mosey may actually be a reincarnation.  To explain the Dane way of approaching life, Gruff suggested I re-run my column about Oney entitled “Middle Management.”  It originally ran in 2008.  If you’re thinking of adopting a Dane, it should be required reading.  I love this breed, but it seems that it is because they most closely mirror my own psychology.  I know, I need help.

We have a black and white Great Dane named Oney. The name Oney rhymes with pony and was the name of my great-aunt, Oney Lavinnia Davis. My great-aunt Oney never married despite having many suitors. She suffered from seizures and did not want to run the risk of passing that on to children. She loved all children but whenever anyone was pregnant, she always hoped that they would give birth to a robust, red-headed boy. Aunt Oney had a real thing for red-headed, freckled boys and I’m certain if given half a chance, she would have kidnapped Opie for her own.

My great-aunt was an industrious woman, gifted with all things involving needles and threads or fabric. She was a wonderful seamstress, fashioning extraordinary formals for my cousin. She was an accomplished lace maker, knitter, and crocheted all my dolls’ wardrobes. She had her daily activity schedule and stuck to it. So does my Great Dane.

My Great Dane Oney is devoted to her routine. From morning to night, she has a plan. Upon rising from bed, she heads directly downstairs to the living room sofa for a post-sleep nap. She believes in starting the day gently and how better to ease into things than with a nap? Then there’s breakfast, eaten with appreciation and grace. After breakfast, the pace quickens and it’s time for her first official pass of the day. This means that she absolutely must go out and inspect the entire property. It’s important for her to establish that during the night we were not invaded by marauders, cutthroats, or groundhogs. Once perimeter security is confirmed, it’s time for the post-inspection nap.

Fully rested, Oney is ready to take on more management duties. She simply can not abide displays of frantic energy of any kind. Screaming toddlers send her straight to bed. Border collies make her insane. If the English mastiff, Joe, and the Basset hound, Clara Jack, start to roughhouse and tussle, it must be stopped. Oney will get in between the two and try to block their contact as they pounce at each other despite her efforts. When that fails, she will put her paw on Clara Jack and push her to the floor. “When in doubt, stand on ‘em” is her leadership mantra.

More important to Oney than crowd control is resource management, or rather the allocation of the rawhide chew bones. We have three dogs, and I always buy four bones because this is not my first rodeo. I’ve learned that when you’re passing out something with the desirability of a large beef rawhide bone, having plenty keeps peace in the pack. Invariably, and for the life of me I can’t explain why, one bone will become “the one.” It, above all other bones, will be the most delicious, the most desirable, and the most sought after bone in the house, maybe even on the whole planet. Now skilled manipulation and strategy become important. Here is where Oney shines.

If Clara Jack has “the one,” there’s not much hope of getting it from her unless one of Clara’s favorite humans comes through a door and she bounds over to them in greeting. Then the bone can be snatched away. That’s a tough scenario to manufacture, so Oney just has to be patient, in position, and wait for opportunity to present itself.

If Joe has “the one,” there’s no waiting involved. Joe sees himself as Head of Security here, and will bark ferociously at the front window at anything that seems askance within a two-mile radius of our property. All are warned. There’s a 200-pound mastiff watching you. All Oney has to do to get the bone is to bark once or twice. Joe will run to the front window to man his security station, barking the whole way. Oney will snatch the dropped bone and run upstairs. After Joe is through securing the house, he’ll return to where the bone was and wonder what the hell happened. I’ve seen this played out too many times to think it’s a coincidence. It’s sneaky, it’s devious, it’s effective; by God, it’s middle management material.

A variation of this maneuver is when Oney has “the one” and Clara Jack has been patiently watching and waiting for her opportunity to pull a quick grab-and-go. I’ve seen Clara sit there over an hour, observing, inching closer, her desire for the bone vibrating off her body. Oney gets tired of the bone but doesn’t want Clara to have it for reasons known only to Oney. Oney will get up, carry the bone right past Clara to a sleeping, oblivious Joe and drop the bone beside his drooling maw, making sure that he wakes up during this process. Joe rouses and thinks that the rawhide fairy has visited and starts to chew the gift. Clara who has devoted over an hour of her time to the pursuit of the bone just stares in disbelief.

Now that Oney has reaffirmed her superiority, it’s time for the official evening inspection of the property. Deer, foxes, and bear are warned that this is dog country, and not to defile the kingdom by trespassing during the evening hours.

Most of the day’s tasks completed, the pace mellows again. Evening meal is eaten, followed by a sound pre-sleep nap on the sofa. All dogs are officially off-duty now. There is sincere snoring until the word is given that it’s time to crawl up the stairs and officially go to bed. Oney’s last management duty of the day is to allocate sleeping space to all on the bed. Gruff and I have reserved spaces, and the three dogs meld themselves into the remaining nooks and crannies. The Basset overheats easily so she prefers space under the ceiling fan, but Oney and Joe both want their blankets thrown over them and tucked in before the lights go out.

Life as a middle manager rocks!