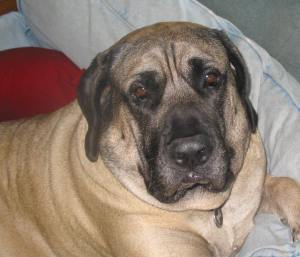 (This is my mastiff Joe who passed away this week just shy of his 12th birthday.  I wrote this piece years ago when I first adopted Joe and am rerunning it in his honor.  I have never met a dog more devoted to my well-being than this boy and I will miss him forever.)

Economically, times are tough. Those that have spending money are finally showing a bit of well-placed caution, and those that don’t have money, well, the decision to become fiscally conservative has been made for them. Economic distress is so close that everyone is feeling its hot, sour breath in our ears, whispering terms of anxiety and fear.

We Americans are strong. We will adapt. We will come through this and be content and prosperous again. Though right now that we’re in the middle of this financial fog and trying to cope, we’d love a gigantic cocktail of scotch and Xanax, hold the ice. Yes bartender, I would like to run a tab.

As people are being shoved into tight corners and having to make painful choices, it is often the most blameless that bear the first, confusing cut. The family dog, particularly if it is a large breed, often finds itself dumped in a shelter through no fault of its own. Large breed rescue groups and shelters are being overrun with owner-relinquished pets as people are being forced out of their homes into an apartment or worse.

If you and yours find yourself having to live in your car, there is no question that Meatball the mastiff doesn’t quite fit your current situation. It’s not Meatball’s fault. He’s grown into 200 pounds of fur-covered familial devotion, but your new reality is that you have a Ford Taurus as a home address and two children sharing the back seat. Meatball has to go. He is an innocent, bewildered casualty of the current economy and it is just not fair.

My heart aches for Meatball. In the interest of full disclosure, I must admit that I am a total sucker for a large dog. I am absolutely potty about lumbering, heavy-jowled monsters. My husband’s favorite breed of dog is the Labrador retriever, which I consider to be just a medium-sized dog, practically petite. We decided to adopt another rescue dog this year to join our two, Oney the Great Dane; and Clara Jack, the Basset hound from Hell. In a fit of unusual practicality, I was leaning towards something smaller this time, even bedroom slipper size, like a Pug.

Then my husband Patrick proved to me once again that he truly does love me all the way down to my toes. He said no. Even though it would have been so much easier on him, he said no to a small dog, because he knows I really do love and prefer large. He reminded me of the joy I’d known with our late Bernese Mountain dog, Bubba, who was convinced I’d personally hung the moon. Patrick told me I had to get an enormous male dog who was as smitten with me as Bubba had been, insuring that domestic bliss would be achieved. He even went so far as to bolt a twin bed onto the side of our king-size bed giving room for all, so no one would be left out of the pack while we slept.

So with Patrick’s encouragement, I found my very own Meatball. An English mastiff the size of Jupiter, he was available through the Southern States Mastiff Rescue group. I met him at the foster home where he was staying. He sniffed me once and promptly jumped in the back of my car. It was a done deal as far as he was concerned. I probably would have acted a bit more coyly, but that would have only wasted time. He was mine, I was his, let’s get on with our lives.

He is now called Joe. He plays with his sisters, likes my husband well enough, and absolutely adores me. And when it comes bedtime, a thundering herd of 420 combined pounds of dogs clomping up the stairs and settling in for the night sounds like disgruntled cattle.

I have never slept better.