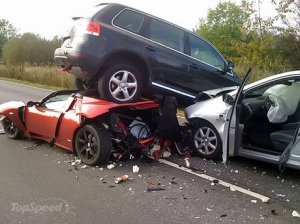 They certainly do if they’re entitled “The Bottle and the Throttle” or “The Last Prom.”  As a police officer, Dad screened vehicular snuff films to driver’s education students.  Not wanting to endure technical difficulties in the class room, he would dry run his presentation in our living room the night before.  No matter how young we were, this was family entertainment of the highest order and we all looked forward to it.  Only Christmas elicited more anticipation.

Movie night is where I learned that when people bleed out, they turn a beautiful, delicate gray-blue color.  Movie night is where I was fascinated that the force of a crash can remove the shoes from your feet while they are still tightly tied, complete with neat, symmetrical bow.  Movie night taught me that brains are slippery things, and the only way to remove them from the asphalt is with a spatula.  Movie night suggested that perhaps the back window is not the safest place for an infant to ride.  Movie night revealed that windshields are unusually cruel to faces, whether they are exiting or returning.

Yes indeed, movie night was exciting.  After watching, there would be a question-and-answer period until Mom deemed it was all too creepy and sent us to bed.  As if we were going to drop peacefully into la-la land after the potent images of destruction that we’d just absorbed.  Violence is truly primal and difficult to forget.  The images invaded our little lizard brains and fermented.  As a youngster, one does not just drift into butter cream dreams after staring slack-jawed at twisting metal and blood spatter.  I wanted more; much, much more.

My favorite scenes were the ones where the car was wrapped around something, front bumper kissing the rear.  I found it remarkable that the stoic tree or telephone pole didn’t snap, didn’t give, forcing the speeding car to accommodate.  Truth be told, I always rooted for the tree.  The tree was just minding its own business, not a care in the world, when — BLAM — some drunken young stud in his mother’s sedan hits it at full force.  How rude!  As penance, the driver endured a vehicle with considerably less interior room than before, often fatally so.

And then there were the questions.  I couldn’t stop questioning what I’d just witnessed.  Why would anyone ride on the hood of a car when a comfortable seat was available?  What idiot invented the game of chicken and why did anyone go along with it?  Why would you ever get into a car driven by someone so drunk they couldn’t walk?  When a drunk driver says “I’m fine, really, I’m fine.” does that phrase magically banish critical thought from everyone else’s mind?  “Oh well, if you say you’re fine let’s go for a drive.”

I had even more questions about drinking.  No one in my family imbibed, so I had no practical knowledge of how alcohol worked. Just how much do you have to ingest before your eyeballs turn pink?  How much alcohol does it take to push you past fun into fundamentally moronic?  Is this threshold the same for everyone or is it different?  Why would you drink something that smells like cough medicine?  I thought Kool-aid was quite tasty, why not just stick with Kool-aid and avoid trouble?  No one ever got pulled over for drinking Kool-aid.  No one’s mama collapsed into racking sobs because they crashed the car while high on Kool-aid.

Another stumper I posed to my parents was this one.  If you’re drunk and crash your car, why does it seem that your chances for survival are better than if you’re sober?  Is it because you don’t realize what’s happening so you don’t brace yourself, locking your arms and legs into stiff twigs to be snapped?  Does being drunk make you bounce like Tigger, and being sober makes you crack like Humpty-Dumpty?  What’s up with some drunks just walking away from massive crashes?  What law of physics makes it possible for them to emerge from a crushed and flaming carcass of a car completely unscathed?

Why is it that the beauty queen is always the one that dies?  I learned early on from these films that being named prom or homecoming queen was the kiss of death.  By third grade, I had made the mental note to avoid all pageants.  According to these films, winning a pageant was a quick road to an early, ugly demise.  Better to be the long-lived drama club geek, than the tragically dead Snow Ball princess.

Straight A students didn’t die in these movies.  The football star and the Junior Miss County Fair ruptured and bled out like slaughtered livestock every single time.  Their death was even more assured if they had (a) just won a scholarship, (b) were scouted for professional sports, or (c) had recently gotten engaged.  Oh, the tragedy!  Obvious message:  don’t get into a car with someone who is too sloppy drunk to talk, no matter how cute he may be or how long you’ve been crushing on him or how much it will impress your girlfriends.  Hidden message:  study hard, get good grades, and be way too geeky for the sports stud to ever want to drive you home guaranteeing your continued health.  It’s the better way to go.